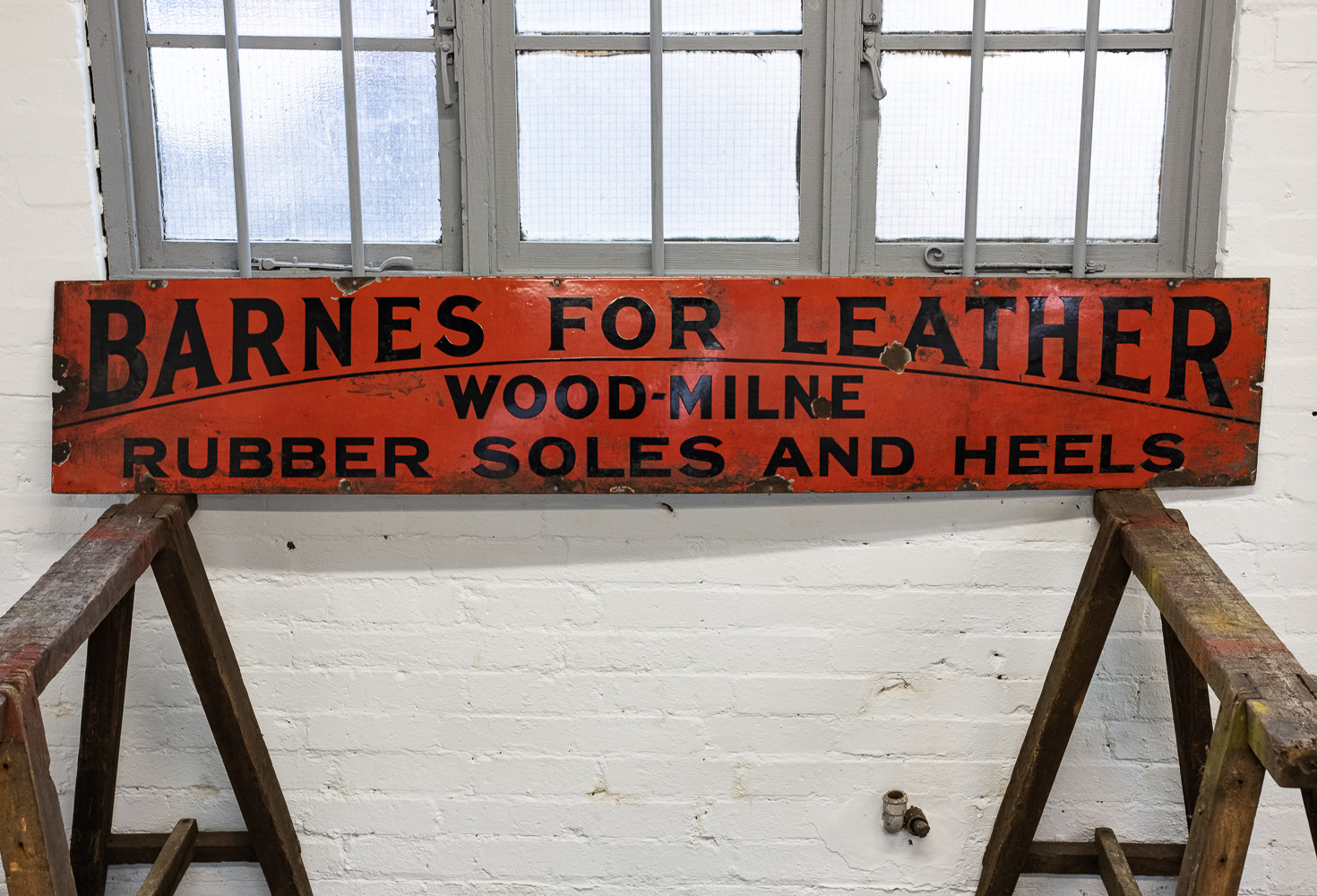 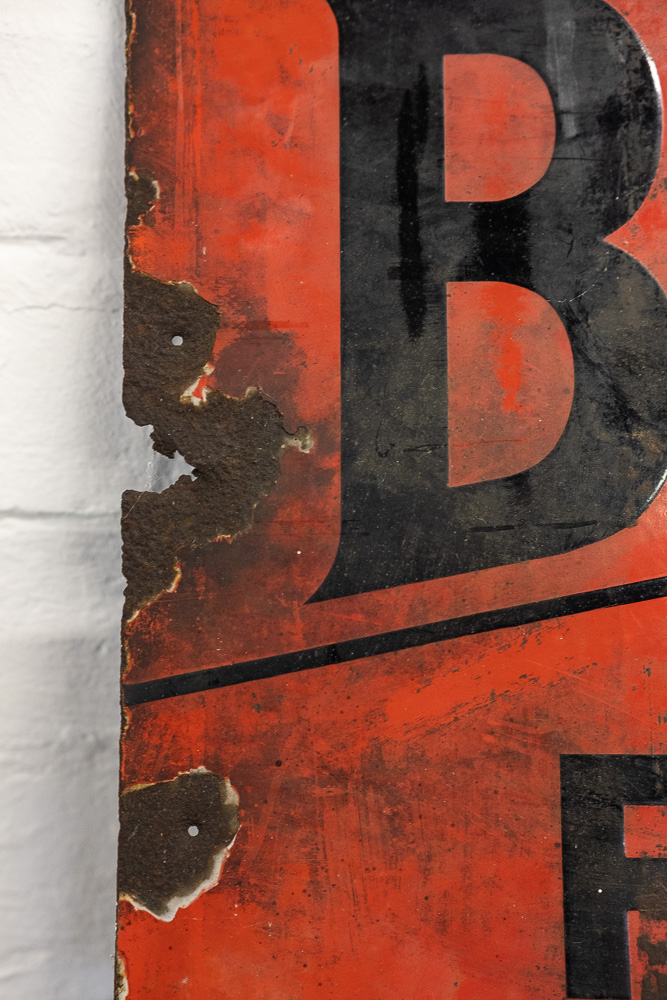 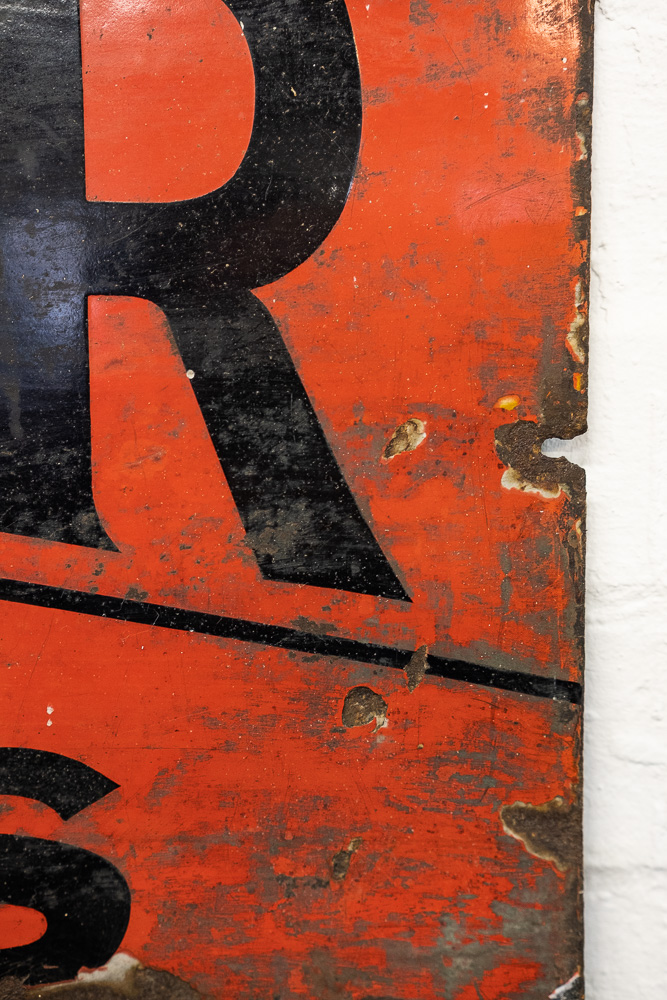 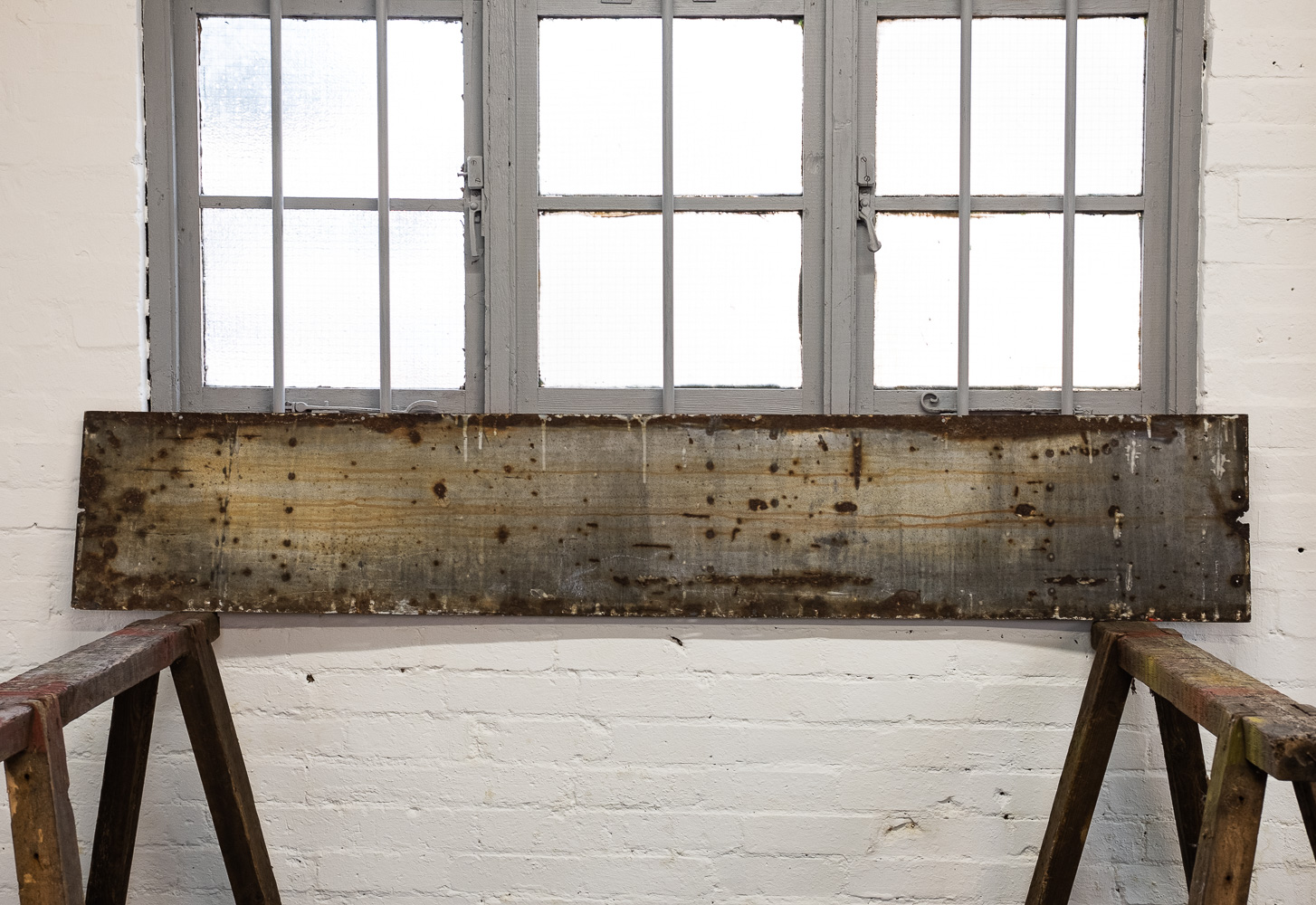 Vibrant and stunning red colour complimenting the black bold lettering. A statement piece of a sign.

Condition: Some damage to both ends and some rust spots from being outside doing its job, advertising.

The Golden Hill Lane factory, Preston, was opened in Leyland by Wood Milne Rubber Company, which was owned by the Roberts family of Farington House.

They also took over the adjacent land, formerly known as Mr William Higham’s Hay and Straw Works. The hay and straw business provided the carting establishments with food and bedding for their horses. The raw material was purchased from local farmers and often the hay was chopped and steamed. The process producing a very strong yet not unpleasant smell, which filled the air along that part of Golden Hill Lane.

1924 Wood Milne Ltd was acquired by British Goodrich Rubber Co, a subsidiary of the American company, in order to manufacture the rubber goods in England.

1934 The parent company became the British Tyre and Rubber Co.

The name B.T.R. Industries came about in 1957 when the old B.T.R. (British Tyre and Rubber Co) ceased production of tyres and felt that the old name was inappropriate.

They moved into their new factory on Centurion Way, Farington in the same year, the Golden Hill factory surviving into the 1970s. 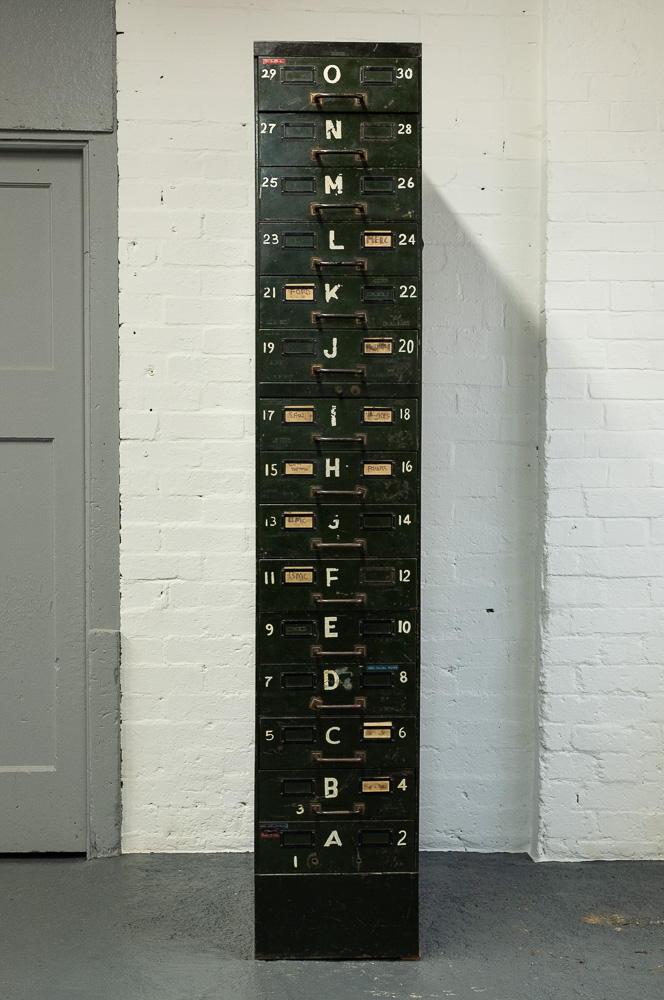 A rather impressive tall bank of 15 metal industrial drawers. Some of the labels relate to cars. The previous owner explained that the drawers belonged to his elderly father who tinkered with classic cars. Indeed there was a one in the garage, namely, an American Studabaker left to the son. This is rather heavy to say the least which would grace any workshop and man or woman cave. Dimensions: H:196cm W:36cm D:62cm Condition is comensurate with years of use in an industrial setting with scuffs, scatches and one bottom side bent which does not affect it at all. The bottom drawer is missing its handle. Circa 1940s. 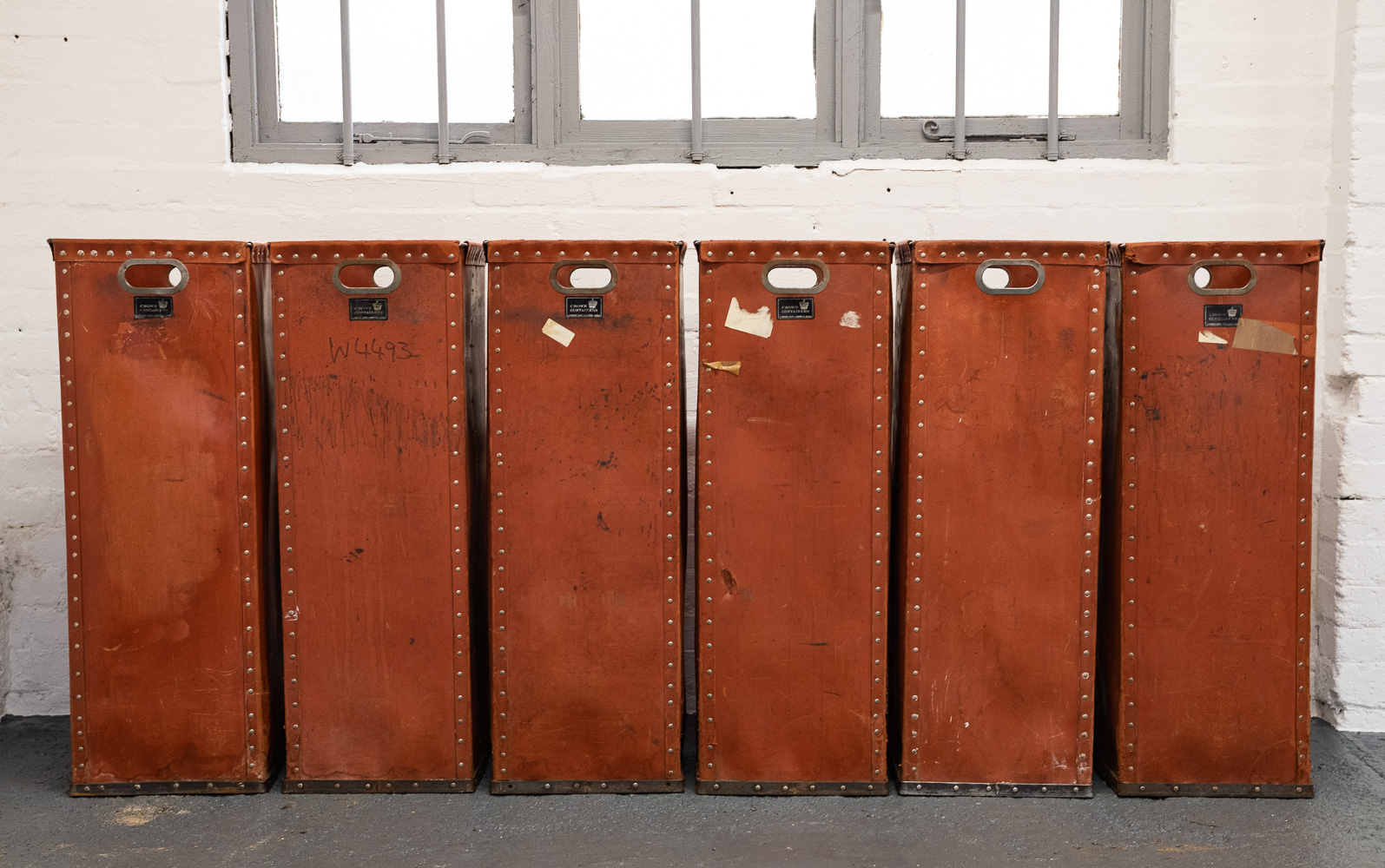 A set of 6 mill bins with makers mark stamped “Crown Containers”. History of Fenhurst Mill in Chadderton,Oldham: 1905 – Built for the Fernhurst Spinning Co. 1949 – Acquired by Cotton and Rayon Spinners. 1964 – Ceased textile spinning. The mill was later occupied by Constallation luggage. 2011 Demolished. Dimensions: H:92cm W:31cm D:31cm Condition: Wear and tear commensurate with years of industrial use. Some TLC is needed  to the bottom of one bin. Price is per the set of six. 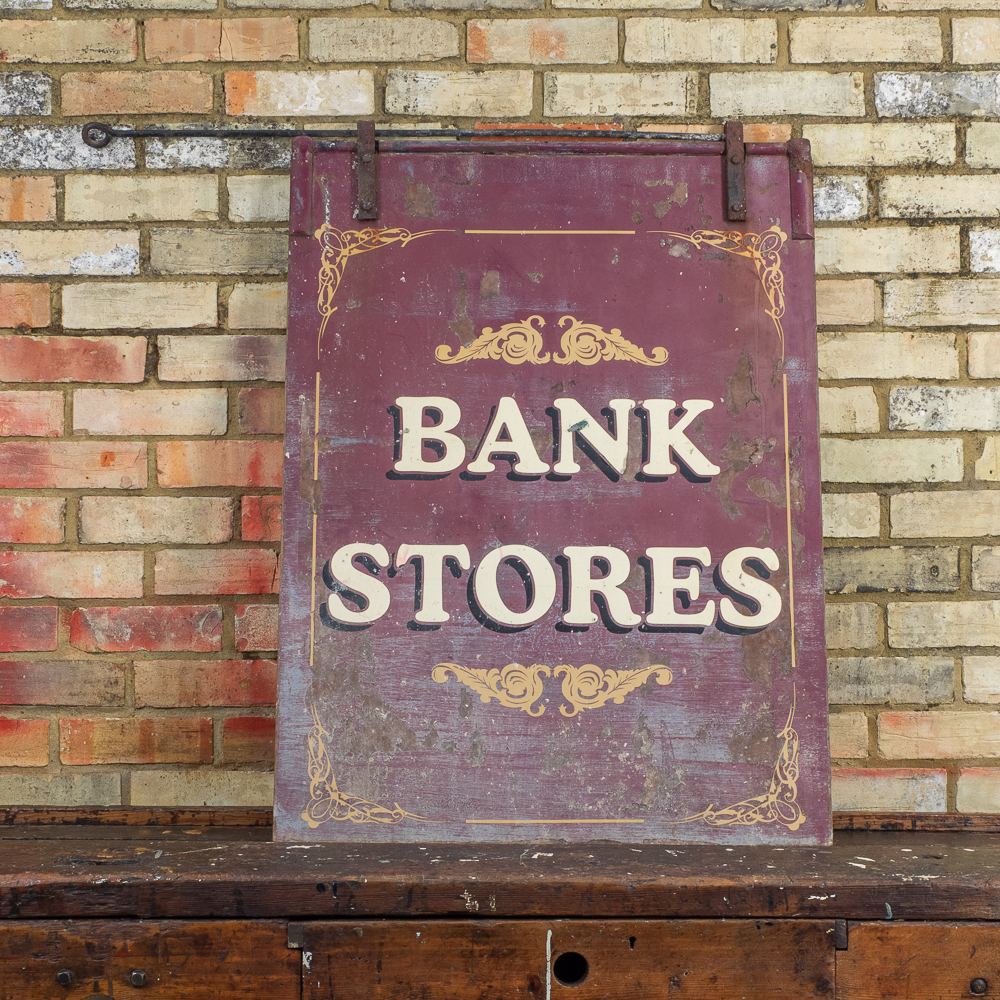 Lovely old original sign worded ‘Bank Stores’. We date this around the early 1900s. It is made of wood with a cast iron fixtures for hanging. Condition commensurate with age and being hung outside. There are losses of paint and flakiness to areas. Dimensions: H:101cm(39.76in) W:76cm(29.92in) W:107cm(42.12)including fixture.Shipping quote on request. 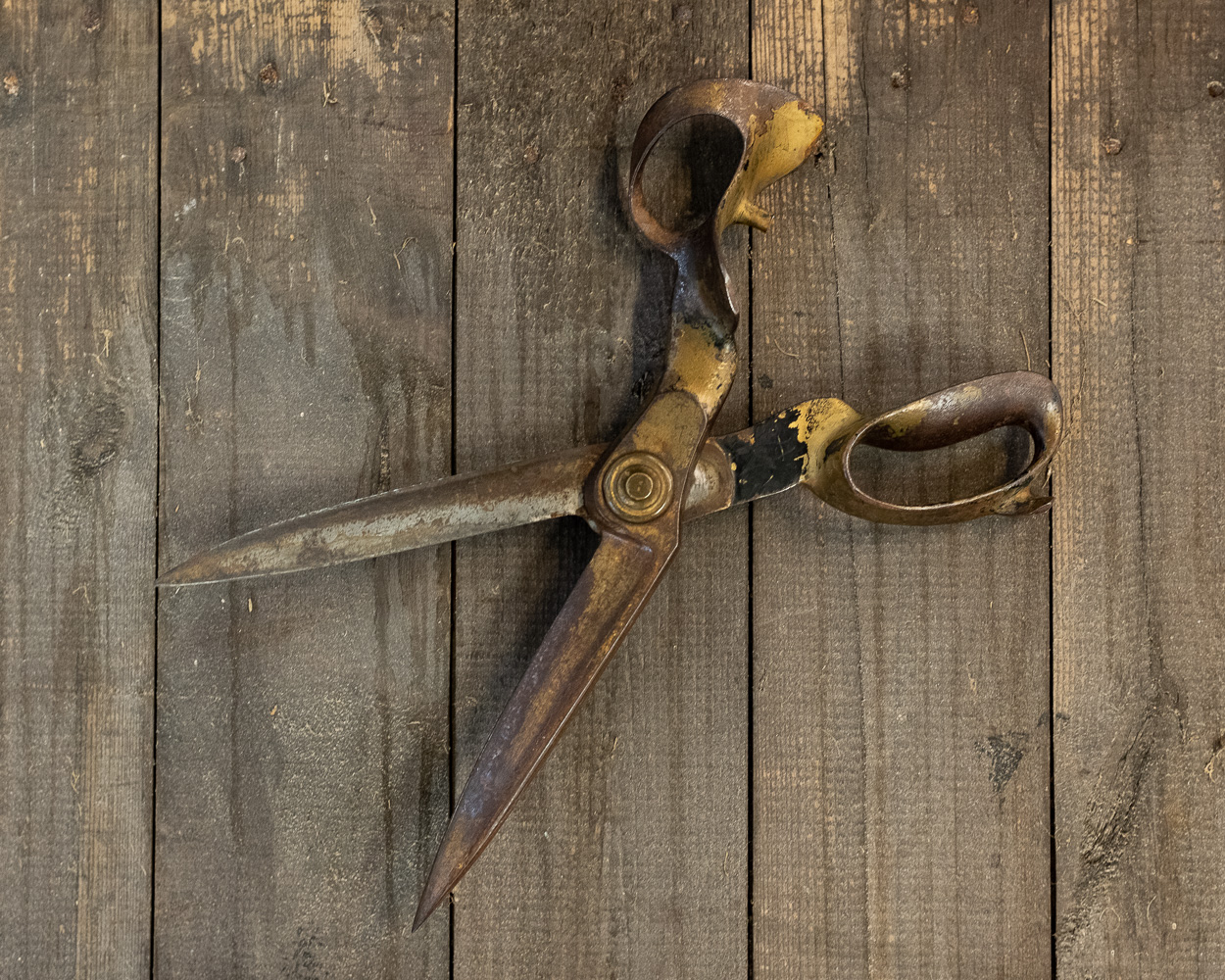 Large antique tailors scissors/shears. The colours are what really make these scissors stand out. The disclouration oozes patina. It appears there are no manufactures markings but they are strikingly similar to that of manufacturer Wilkinson &amp; Son. Condition: Though they are a bit stiff they do fully open and close. If to be used this would need addressing and the blades sharpening. Otherwise, they would make a great decorative item. Dimensions: 35cm long. Circa 1910 -1930sFree shipping to mainland UK only. For outside mainland UK, please request a shipping quote. 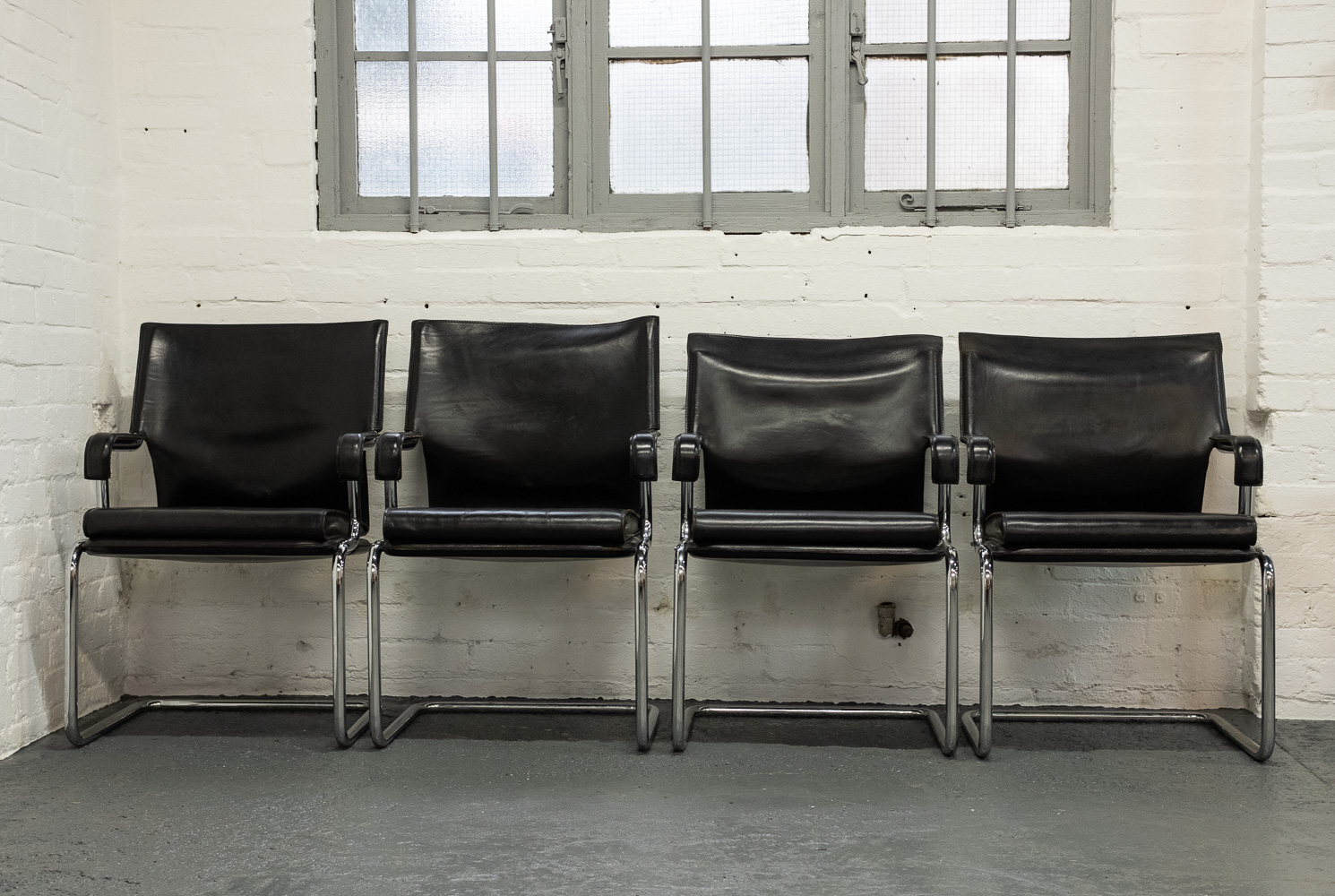 A set of 4 Italian Archizoom Uno black leather and chrome cantilever armchairs, designed by Paolo Daganello and Gilberto Corretti for Marcatre, 1973. Dimensions: W:57cm H:89cm D:49cm Condition is comensurate with years of use as evidenced in the photos. Price is for the set of 4. We are happy to quote for shipping with a specialist courier on request. 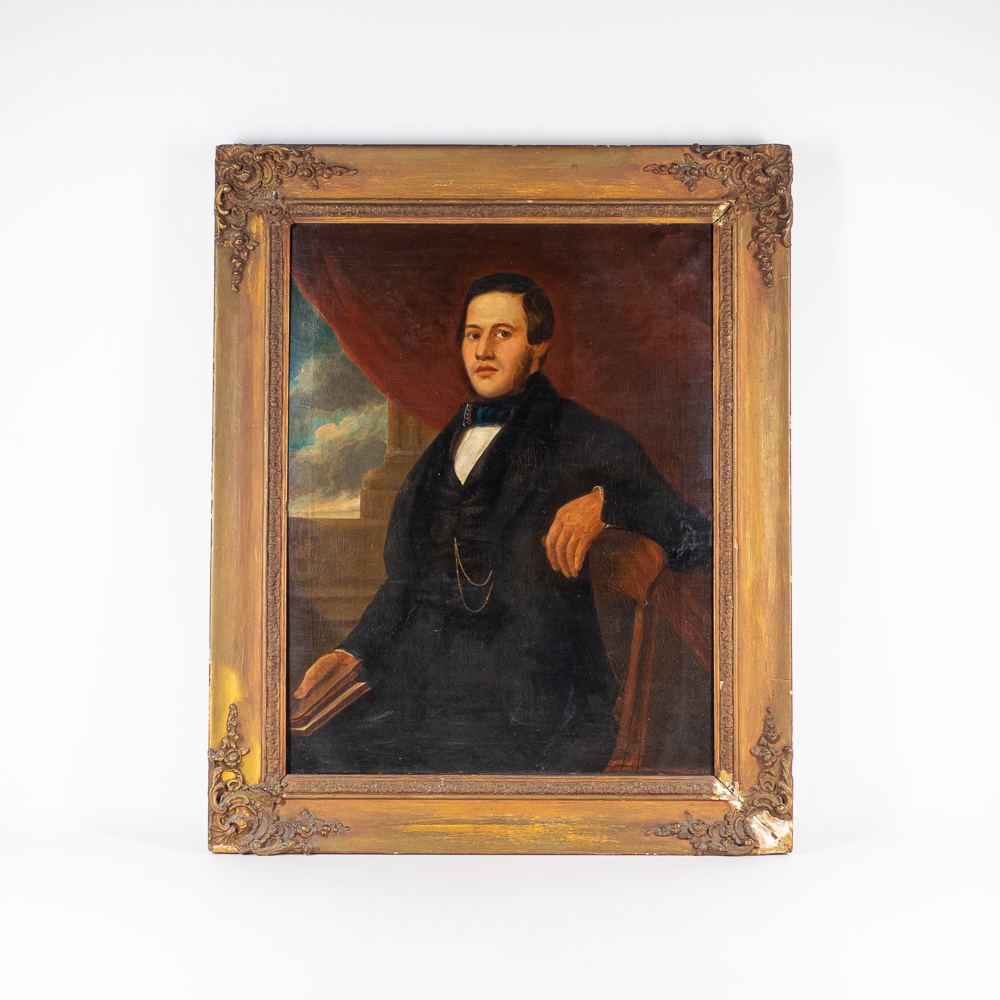 A large 19th Century unsigned oil painting on canvas of a gentleman with sideburn chops. Impressive due to both its size and quality, this well-painted artwork has minor repairs and small distressed areas on the ornate frame that do not detract from the paintings appeal. These small defects can be seen in the images, including the gap between the left side bottom corner of the painting and the frame as well as the repairs, particularly the repear near the face. There are no issues with the face itself. Please see all the photos to get an appreciation of the painting’s condition. A truly lovely painting. DIMENSIONS: H:115cm(45in) W:93cm(36.5in) D:6cm(2.5in) 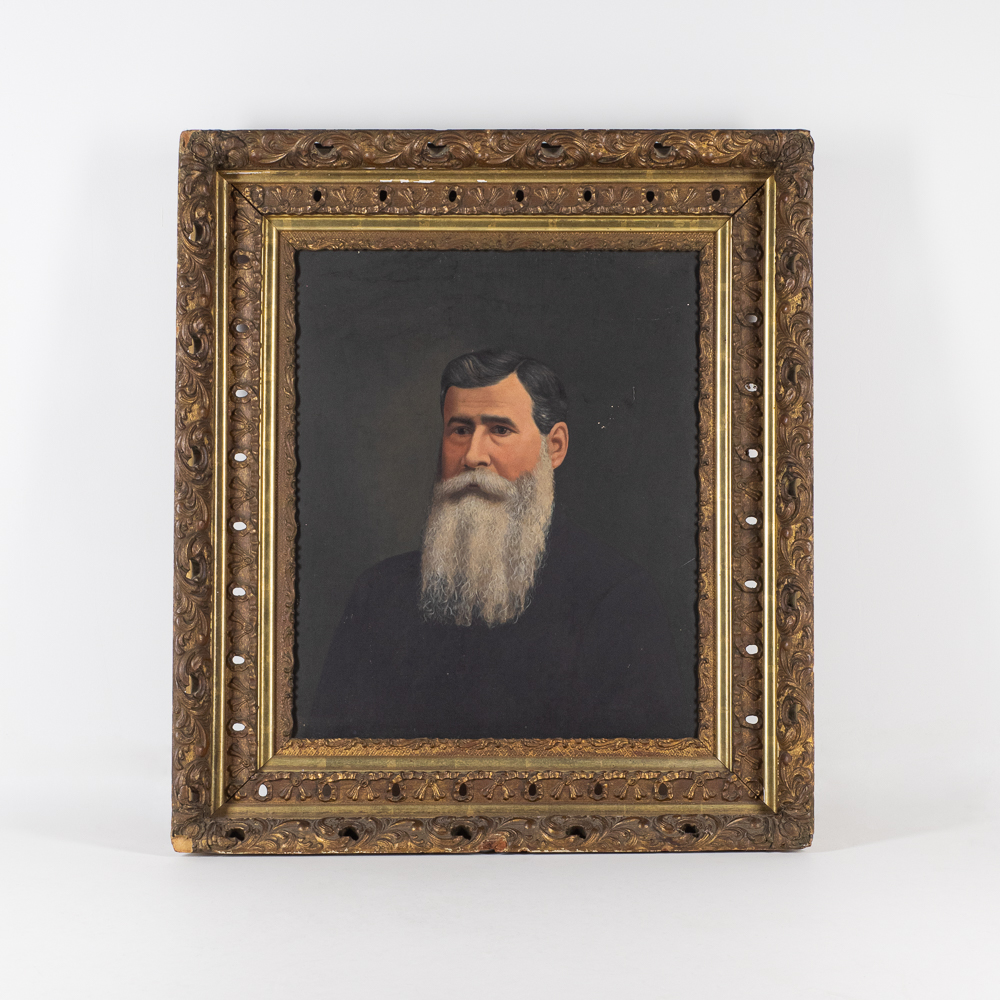 19th CENTURY OIL ON CANVAS OF A BEARDED GENTLEMAN

A lovely painting of a Victorian bearded gentleman. The silver beard is rather impressive as too is the frame. The photos show how ornate the frame is from the front, sides and rear boasting an intricate design. Also shown are the frames imperfections and some paint loss by the gentleman’s right side. There are two old labels on the frame, one by the side and the other to the rear. The one on the rear reads ‘GODDEN & SON. Furniture Removers & Wharehousemen CANTERBURY. A2759’. This business was created in the 1890’s by Frederic J. Godden – Auctioneer, Furniture Remover, Upholsterer & Cabinet Maker. It appears that this painting more than likely went through their hands either via their auction or as part of what is commonly known today as a house clearance. The label adds insight into this painting which is invaluable. It helps to tell part of its story and history. What is just as pleasing is to see (online) photos of Godden & Son’s work premises and vehicles. It really helps to give you an appreciation of the true picture of this painting. The other label in part seems to read ‘James, Park Lane Croydon. Is this label as old as the other? Was the painting being delivered to or collected from James? Endless possibilities. DIMENSIONS: H:85cm(33.46) W:75cm(29.52in) 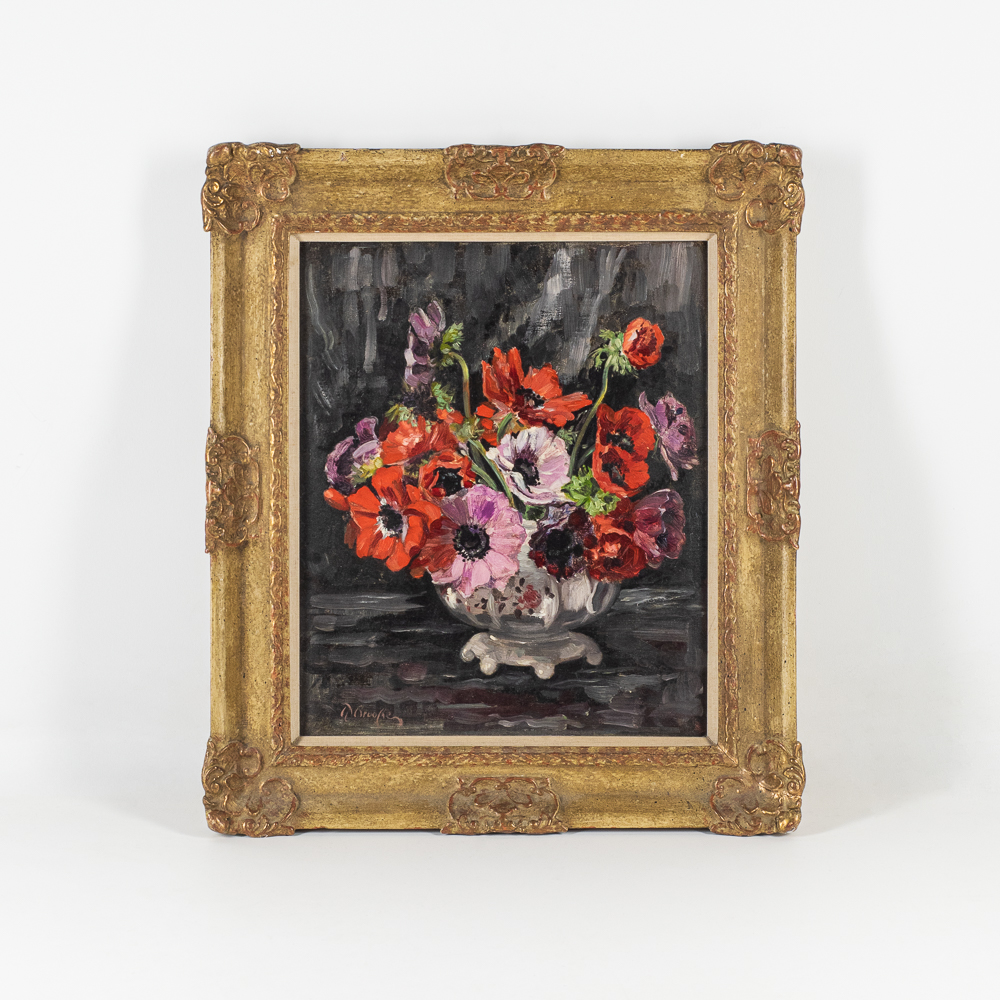 A truly lovely and eye catching mid 20th century oil painting on board signed D. Brookes. This stil life, vase of poppies is surronded in a rather decorative frame. Excellent condition and ready to hang to be enjoyed. DIMENSIONS:(Inc frame) W50cm(19.68in) H59cm(23.22)Shipping to mainland UK £15.Non mainland UK, please request a shipping quote.